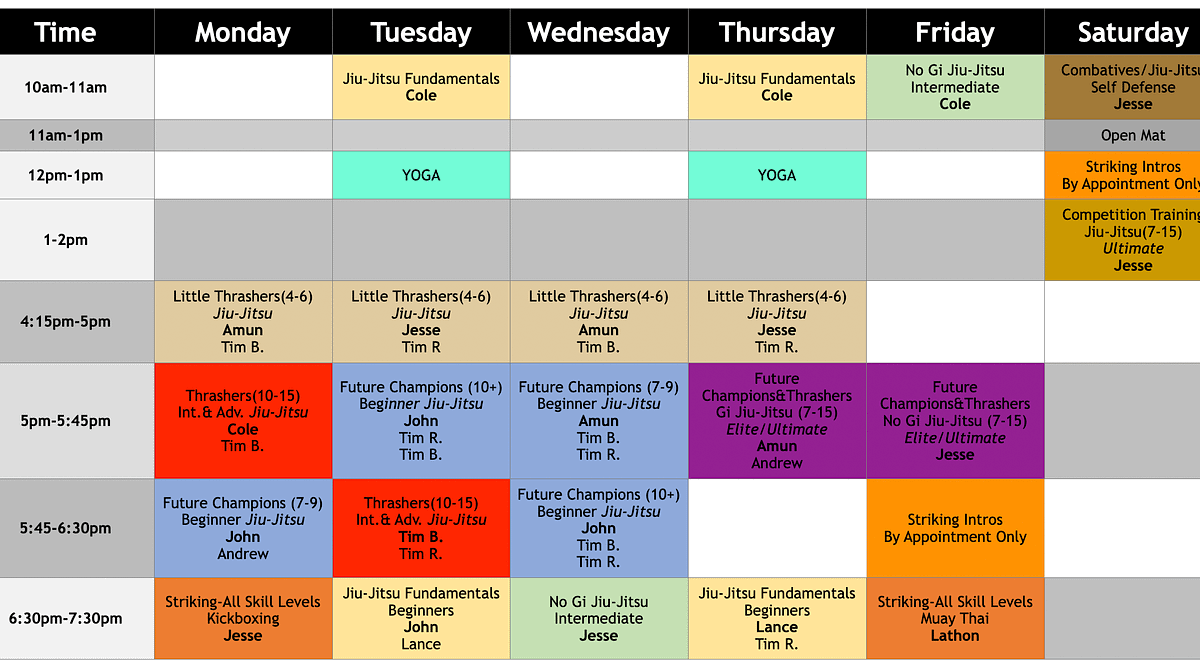 Solid Turnout from the Tournament this weekend. Kids and Adults did great(more on that in a moment). We could. not have done this without you guys. The performances were a testament to the quality leadership they are receiving on the mats.

Morgan just went out there and didn’t care nor really try, but he’s getting better…hard to be good when you don’t care about competing.  He’ll get there.

Coach Tim R. competed as well. I was coaching when he did his no gi match, I came over in the middle of it.He was so far down on points there wasn’t much to do but watch. He nailed a sick takedown and was passing well when time ran out.

Gi: Some brazilian young man walked the dog on him in the first half of the match. Im not entirely sure points were done correctly , but same story. After escaping a flying triangle attempt the points were so ran up that when he was hard pressed to be able to win on points. He nailed a sick spider “deadlift” pass and then got the back but failed to finish the RNC. finished strong. Tim, Im proud for you representing and you showed moments of brilliance. I think the key to getting past being a slow starter is to just compete more often to be able to learn to channel that get up and go at any time.

Other than Dee, the commonality here is those that competed and crushed were those that come to the more advanced classes….even when its only once a week. Anyone thinking about competing, lets make sure they’re getting the most out of fundamental classes and def coming on Monday nights and open mats os they get the rolls in…anyone that is 2 stripes and above on white belt, they gots to come to the get down classes.

T/Th 11:30 we should be live helping moon and Jesse until their fights drills, pads, light sparring

Monday Nights sequences for my fundamentals class were
1.Head Inside and Outside Run the pipe

4.Do any they give the back, take the back conventional over the shouilder

5.above but they turn in>far side chair sit to choke

6.They turn in to 3/4 mount,  swing step over the head and get front head lock submissions

Fortitude. : This week share a story of your own personal fortitude.

Guard Passing: Off of the SL takedown Pass the guard and teach some side mount reversals, or escapes that go directly into an attack.

Play some pass/retention games vs a standing opponent

Advanced: Leg Drag from De la Riva Guard and Feet on hips> Side mount>submissions vs escapes